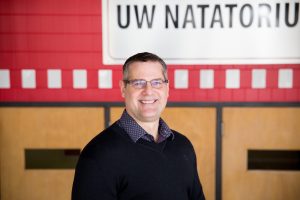 Congratulations to Dane Cook, PhD, for the recent cost-extension of his VA grant focusing on Gulf War Illness.

In addition to being a Professor of Kinesiology, Dr. Cook is a Health Science Specialist at the Madison VA. He conducts research on the psychobiology of exercise, using exercise as a model to study both biological (e.g. brain structure and function & immune function) and behavioral (e.g. symptoms of pain and cognitive function) outcomes – including the phenomenon of post-exertion malaise. The overall goal of his research program is to better understand central nervous system mechanisms of disease in Veterans with Gulf War Illness, as well as in patients with fibromyalgia and chronic fatigue syndrome.

His original VA grant focused on dysfunction among central, autonomic, and immune systems in Gulf War Veterans suffering with Gulf War Illness. The extended project will add new technological approaches to determine the metabolomic, proteomic, and transcriptomic signatures of Gulf War Veterans at rest and in response to acute exercise, which is known to induce or exacerbate symptoms. The work will be conducted in collaboration with the New Jersey War Related Illness & Injury Study Center at the VA New Jersey Health Care System and Columbia University.