Janet Branchaw (PI)  – 5 yr grant from Howard Hughes Medical Institute: “From Access to Success:   Developing and testing a model program to increase 2- to 4-year STEM student transfer and graduation   rates   in the state of Wisconsin”

Kristen Pickett was featured on the news for her tango lessons with those living with Parkinson’s!

The brainstem is a complex and early-developing brain region that is responsible for sensory, motor, autonomic, and critical-for-life functions. However, technological barriers have prevented researchers from being able to examine substructures of the brainstem with neuroimaging.  In this research, we will examine specific white matter tracts and nuclei within the brainstem in relation to the sensorimotor and core symptom challenges commonly experienced by children on the autism spectrum. Successful completion of this research will help us understand the brain basis of the sensory, motor, and core symptoms in autism.

Dan Timm facilitated community building workshops for Our Wisconsin in September. Our Wisconsin is the inclusion program for new students intended to increase awareness of other cultures and improve campus climate.

Ryan Dougherty of the ExPsych lab is gracing the fron page of the UW Graduate School website! If you head to https://grad.wisc.edu/, you can see the headline about his publication titled, “Moderate physical activity is associated with cerebral glucose metabolism in adults at risk for Alzheimer’s Disease.” Follow the link to https://alzheimersnewstoday.com/2017/07/10/moderate-but-not-low-intensity-exercise-might-protect-brain-from-alzheimers/ to read up on what Ryan and Dr. Okonkwo had to say about the study. Way to go, Ryan!

Dan Timm co-led 18 students in the Global Health Certificate’s Obesity and Health in Austria course on a field experience to Vienna in May. He arranged lectures by faculty in the Department of Nutritional Sciences at the University of Vienna. The group also attended the International Conference on the IAEA Technical Cooperation Programme at the United Nations.

Dan Timm received a Presidential Citation at the Society of Health and Physical Educators national convention for his years of service to the organization’s Midwest District. Timm has served the district as a member of the Board of Directors; Leadership Council; Dance, Sport, and Physical Education Council; Awards Committee; and Social Justice and Diversity Committee; and has represented the district at the national Delegate Assembly.

Beth Larson has been accepted into the UW-Madison Teaching Academy, and will officially become a member on April 12, 2017.

Dorothy Farrar Edwards received an award at the 2016 Annual Meeting of the Alzheimer’s Association. It was in recognition of research in a presentation, “Connecting the Dots: Meeting the Diagnostic and Treatment Needs of Underserved Urban African American Elders with Memory Loss,” at the Alzheimer’s Association International Conference in Toronto in July. The research project, supported by the Wisconsin Partnership Program, is focused on a multidisciplinary memory diagnostic clinic at Milwaukee Health Services – a Federally Qualified Health Center.

Dane Cook will give the annual Lewis Lecture at the Univ. of Georgia in Athens in February 2017.

Dan Timm was elected College/University Division Vice President of Wisconsin Health and Physical Education at its annual convention in October.

Dan Timm represented the Midwest District at the Society of Health and Physical Educators Delegate Assembly.

Ruth Benedict asks you to join her in congratulating Brittany Travers on receiving a Hartwell Foundation Grant! A huge honor for Brittany and UW-Madison.

Mom reports that Gunnar is growing well, is happy and healthy, and his parents are very grateful.

who successfully defended her dissertation and completed her doctoral program.

Dan Timm presented Improving One’s Social Wellness Through Familiarity With Cultural Self at the UW-Madison Wellness Symposium in October.

Dan Timm received the Honor Award of the Wisconsin Health & Physical Education association (WHPE) at its annual convention in October. The award honors the state’s best physical educators for ten or more years of continuous service in organizing, leadership, teaching excellence, and public enhancement of WPHE.

Robert Yu, Senior Lecturer, has been involved with on-going research on the psychological effects of Tai Chi training through the Waisman Center and the Center for the Investigation of Healthy Minds, under Richard Davidson. See: Alex K. Converse, “Tai Chi training reduces self-report of inattention in healthy young adults”, Frontiers in Human Neuroscience, January 2014, vol. 8, article 13. This research was conducted over a two-year period with students enrolled at UW-Madison.

Rachel Rogers and Grace Bellinger (MS students – Mason Lab) along with Andrea Mason and Brittany Travers attended the Society for Neuroscience Meeting in Chicago, October 17-21st. They presented a poster 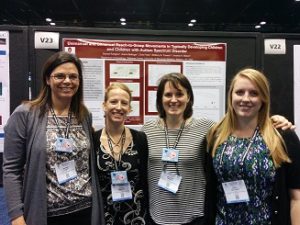 detailing preliminary results of their study looking at bimanual coordination in typically developing children and children with Autism Spectrum Disorder. Their findings indicate that children with Autism perform unimanual tasks more slowly than typically developing children. Surprisingly, no differences were found for the bimanual tasks. They are further exploring the effects of individual differences on their results.

Dan Timm presented “The Influence of Cultural Self on One’s Teaching” at the University of Wisconsin System Institute for Urban Education Professional Development Conference (August, 2015).

Brittany Travers shares that a blog post covered her most recent publication.

Nancy Krattiger-Ziltener and Dan Timm served as marshals  at the 2015 Commencement on May 16.

Annie Gallagher, a kinesiology undergraduate working in Kristen Pickett’s lab, received a 2015-2016 Wisconsin Hilldale Undergraduate/ Faculty Research Fellowship. She will study Olympic style weightlifting on an award grant of $3,000 to the student and $500 to the faculty collaborator. Chancellor Blank presented the award at a ceremony on Monday, May 4.

April 2015:  Debbie Bebeau has been selected as a UW-Madsion Teaching Academy Fellow.

April, 2015: Tim Gattenby has been awarded the “Distinguished” prefix by Dean Underwood and the Campus Review Committee in recognition of his extraordinary teaching and service.

March, 2015: Dan Timm presented “Improve Your Teaching Through Cultural Awareness and Connection” at the Society of Health and Physical Educators National Convention and Exposition.

Dane Cook has been selected as the first Director of the Marsh Center.

Dan Timm is elected to the Society of Health and Physical Educators Midwest District Leadership Council for 2015-2017.

Dorothy Farrar-Edwards has been re-elected as our Department Chair.

Bill Schrage has been appointed as a Vilas Associate.

Gary Diffee has been appointed as our department’s first Marsh Professor.

Mikhail Kellawan (from Bill Schrage’s lab) was awarded a 2-year American Heart Association Postdoctoral Fellowship. He will study how blood flow is controlled to brains of pre-diabetic adults.